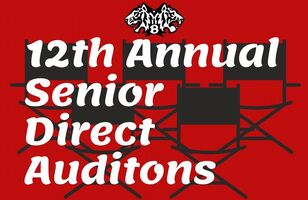 ​Every year we honor our seniors and their hard work by showcasing their directing skills. This event is a capstone for many outgoing Seniors who started out as Freshman in our department and are passionate about theatre.
​Please join us in honoring our department seniors.
The Manhattan Project by Jackson Reasoner (5M)
Directed by Jackson Reasoner
In a historical fiction following four of the real figures behind the invention of the atomic bomb, the members of the project must grapple with the grave morals behind their objective. Oppenheimer wants to stay on task, Weinberg wants to further his own research, Szilard wants a peaceful solution, while Groves and FDR just want to end the devastation of the Axis Powers. The conflicting goals reach a climax as explosive as the bomb they have created.

It’s About Time by James P Brosnahan & Joseph S Kubu (2M - 2F)
Directed by Madeline Clark and Morgan Smithwick
Nick has brought Kim to the museum to look at art, but also to propose. Unfortunately they are interrupted by Nicholas who seems to know a lot about art and the two of them. He is actually a future version of Nick, and has his own plans for the evening.

Good is Just Around the Corner by Porter Dotson (2M - 2F)
Directed by Porter Dotson
Ian is a male nurse during World War 1 who failed to get into the Army, unlike his brother. He and Dory, his coworker, save a soldier on the spot, but unknown to them he is a German soldier named Josef. Ian has to deal with this moral dilemma and his own lack of self worth, while also nursing Josef back to health.